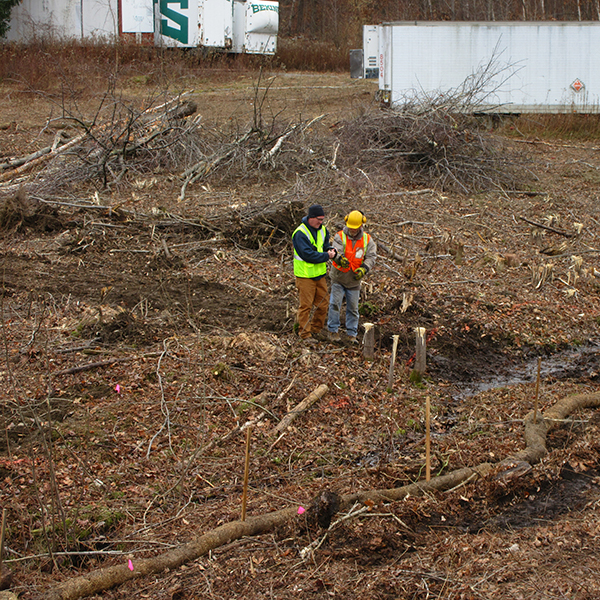 Credere was contracted by U.S. Army Corps of Engineers (USACE) New England District in 2017 to perform soil remediation at the St. Albans Air Force Station Building 300-315 Area of Concern in St. Albans, Vermont.  The Site operated as the heating plant and maintenance buildings during operation of the Air Force Station between 1951 and 1979.  Prior investigations completed between 1988 and 2016 identified an area of coal ash surrounding building 300 that reportedly contained concentrations of polycyclic aromatic hydrocarbons (PAHs) and arsenic exceeding a remedial goal (RG) established during preparation of a 2015 Remedial Investigation.  A subsequent 2016 Feasibility Study recommended removal of soil exceeding the remedial goals at the time.

Prior investigations performed an extensive grid of soil borings; however, random number generation was used for selection of soil analytical sample locations resulted in spatial data gaps.  Therefore, the nature and extent of contamination was not fully defined and the specific locations for soil removal were not known.

Based on the recommendations of the Proposed Plan and Decision Documents, Credere completed a Pre-Design Investigation to support remedial design and construction activities associated with the soil remediation.  Credere prepared a Uniform Federal Policy (UFP) worksheet-based Quality Assurance Project Plan (QAPP) with an associated Field Sampling Plan (FSP) to outline the proposed scope and procedures to delineate the extent of PAH and arsenic impacted soil above the RGs and horizontally and vertically delineate the area to be removed during remedial implementation.  Execution of the scope included clearing of vegetation to allow access to the Site and advancement of direct push soil borings at previous locations where samples were not collected.  Samples were collected continuously in 0.5 to 4 foot intervals to characterize the full thickness of observed coal ash.  Samples were analyzed for PAHs with selective ion monitoring (SIM) and arsenic.  Analytical results were validated by a third party validator prior to use in remediation design considerations.  To support data management, Credere became familiar with FUDSChem and prepared an eQAPP, completed event planning, and maintained chain of custody submissions after demobilization.

Using the analytical results for PAHs, a benzo(a)pyrene toxicity equivalent (BaP-TE) was calculated for each sample for comparison to the previously established RG.  It was found that a very limited extent of soil – approximately 60 cubic yards – would require removal for the Site to meet the RG.  To thoroughly evaluate the real need to implement this limited remediation, updated screening values were used to recalculate the RG to better reflect currently published values.  The recalculation indicated the RG for BaP-TE would be substantially higher and for arsenic would be slightly higher, resulting in no need for soil removal to meet the RGs.  Credere’s Pre-Design Investigation report was submitted and approved by both the USACE as well as Vermont on March 23, 2018, which is currently in review.

The results of our Predesign Investigation reduced the amount of soil requiring removal from 10,000 to 0 tons saving the USACE over $2 million.  The site will now be closed out in early 2019.